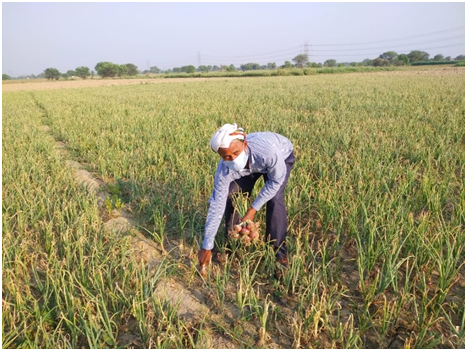 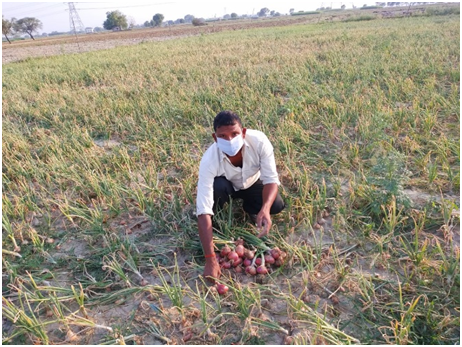 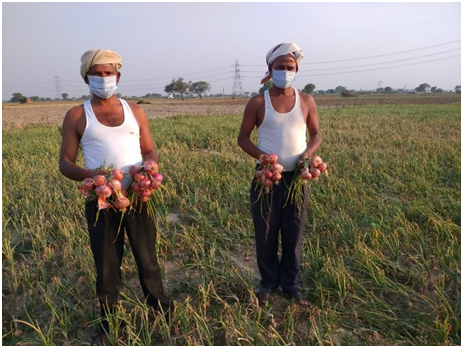 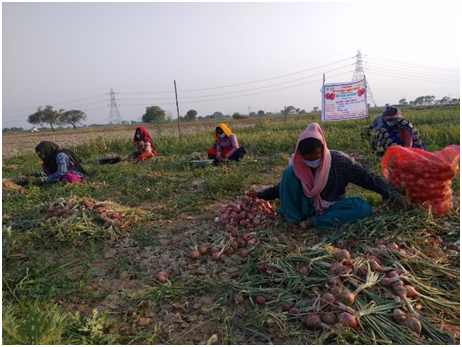 Onion is an important commercial crop which can improve livelihood of poor farmers. It also plays a crucial role in food and nutritional security of human beings. Though, the eastern part of Uttar Pradesh especially Mirzapur has congenial climatic conditions for onion production at commercial level, the cultivation of onion was limited during rabi, mostly for kitchen gardens. There is tremendous scope to cultivate onion during both kharif and rabi seasons at commercial level to achieve more profit. The farmers of Mirzapur district generally cultivates local varieties of onion which yields was very low. Therefore, it was decided to promote high yielding onion varieties and other production technology of ICAR-DOGR in Mirzapur district of Uttar Pradesh. We have conducted interaction meetings as well as trainings for progressive farmers in collaboration with Seva International, Kashi and GK Research Development Foundation, Varanasi to adopt new technologies of onion production in Mirzapur, Varanasi, Ghazipur and adjoining areas. A total of 30 field demonstrations on onion cultivation of newly released variety ‘Bhima Kiran’ with improved production technologies were conducted during rabi 2019-20 in Mirzapur (UP). Thirty progressive farmers (6 from each village) were selected from five villages viz.; Gangpur, Bagahi, Jalalpur, Govindpur and Shahaspura of Narayanpur block of Mirzapur district (UP) with the support of Agrimitra Farmer Producer Company, Mirzapur. For the first time, rabi onion production was initiated at commercial level in Narayanpur block of Mirzapur. Farmers have earned a net income of Rs. 41,000-51,000/- per acre through production of onion bulbs about 66-71 q per acre from Bhima Kiran variety even in national lockdown situation due to COVID-19. Mr. Shambhu Sahani from Govindpur, Chunar, Mirzapur (UP) raised onion bulb crop as per ICAR-DOGR recommended technology and produced 71 q per acre marketable bulb yield. He earned net income of Rs. 51,000/- per acre as his onion bulbs were sold at the rate of Rs. 10/- per kg in the local market whereas, another farmer Arvind Kumar from Gangpur, Chunar, Mirzapur (UP) produced 66 q per acre onion bulbs by following ICAR-DOGR recommendations and earned Rs. 41,000/- net income. His onion bulbs were sold at the rate of Rs. 9/- per kg even in national lockdown situation due to novel corona virus. During above activities, farmers were maintaining social distancing, using face mask and washing their hands with soap or sanitizer on regular basis. Farmers might have received more profit if national lockdown was not induced during March-May 2020. However, most of the farmers from selected villages are now ready to cultivate onion crop on commercial scale as they have seen the profit gained by the farmers in demonstration areas. The demonstrations led to conclusion that the eastern part of Uttar Pradesh is suitable for both kharif and rabi onion production.