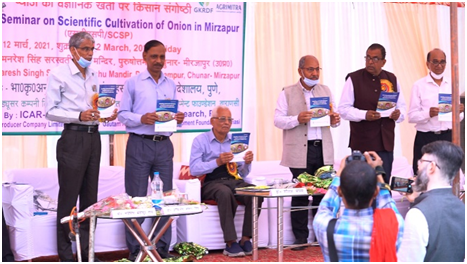 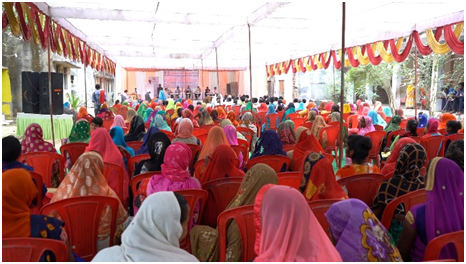 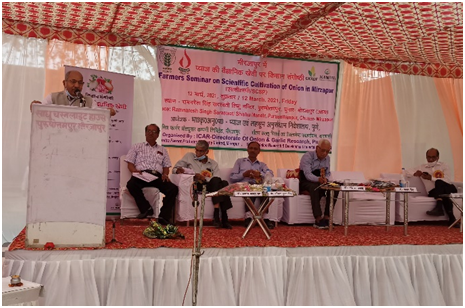 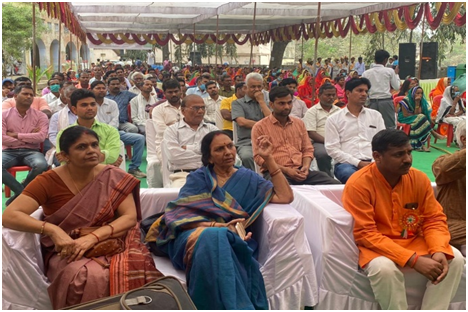 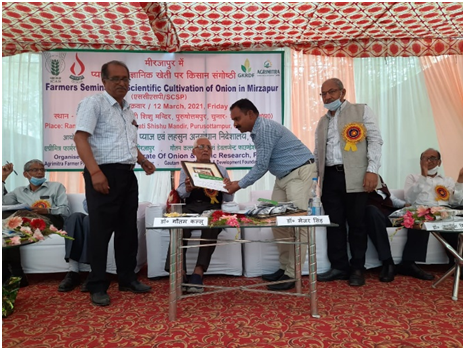 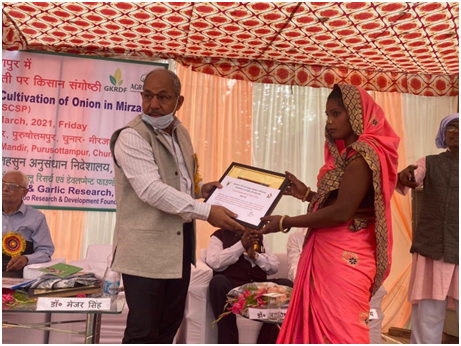 The Chief Guest Dr. Gautam Kalloo praised the farmers of Mirzapur for their appreciative work related to security of food, nutrition, health, employment and leading in adoption of new agricultural technologies. Dr. Kalloo appreciated the efforts of ICAR-DOGR taken in technology development on onion and garlic and transfer in the country. Further, he stated that more attention is needed in development of storage capacity and reducing post-harvest losses. The stabilizing of onion prices and doubling farmers’ income are big challenges but it would happen when farmers adopt commercial cultivation of kharif onion. The special guest of the programme, Dr. Major Singh, Director, ICAR-DOGR, Pune said that the area has immense potential for kharif onion cultivation. Dr. Singh assured farmers that the Directorate will continue to support onion cultivation in Mirzapur and other suitable areas.

Dr. Amar Jeet Gupta, Principal Scientist, ICAR-DOGR & Coordinator of Kisan Sangosthi, emphasized on the current situation of onion cultivation as well as livelihood security of farmers through commercial cultivation of kharif onion. Dr. Gupta also appreciated the farmers for adoption and their active involvement in cultivation of onion in Chunar Tahsil of Mirzapur. The production and productivity of onion in Mirzapur have been remarkably increased by 93% and 32%, respectively after intervention of ICAR-DOGR technologies in collaboration with Agrimitra and GKRDF. Dr. Nagendra Rai, Principal Scientist, ICAR-IIVR appealed the farmers to be organized in Farmers Producer Companies for increased collective bargaining power. Shri Lal Bahadur Singh, Director, Agrimitra Farmers Producer Company said that India has achieved remarkable growth in onion production and scientists have good contribution in onion and garlic research and development in the country. There is need of more attention towards policy framework to mitigate price crises in onion. He appreciated the efforts by ICAR-DOGR in taking initiative for bringing different stakeholders on the single platform by organizing the Kisan Sangosthi.

Due to the congenial climate of Chunar Tahsil of Mirzapur, most of the farmers have adopted commercial cultivation of kharif onion and getting a net profit of about 0.7-0.8 lakh per acre. Hence, in the coming time, Mirzapur can become a hub for kharif onion production in India. Some farmers have achieved success in earning more than three lakhs net profit per acre in kharif 2019 due to onion price hike. Five progressive farmers namely Ms. Geeta Devi, Ms. Savitri Devi, Mr. Virendra Kumar, Mr. Shambhu Nath, Mr. Ajay Kumar and one active worker Dr. Govind Narayan Singh were honoured in Kisan Sangosthi.

On the basis of three years of demonstration trials conducted by ICAR-DOGR in Mirzapur, it is revealed that the area of Mirzapur is suitable for kharif onion production and there is tremendous scope to cultivate onion during kharif at commercial level to achieve more profit than rabi onion and other traditionally growing vegetables. The programme was ended by vote of thanks expressed by Dr. A.B. Rai, Ex-Principal Scientist & Head, ICAR-IIVR, Varanasi.