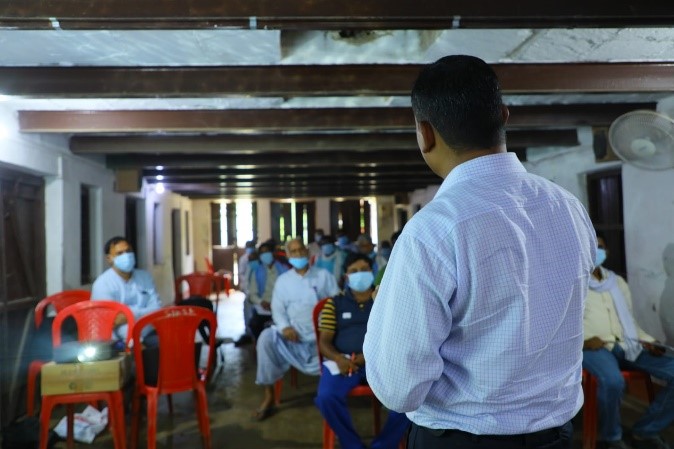 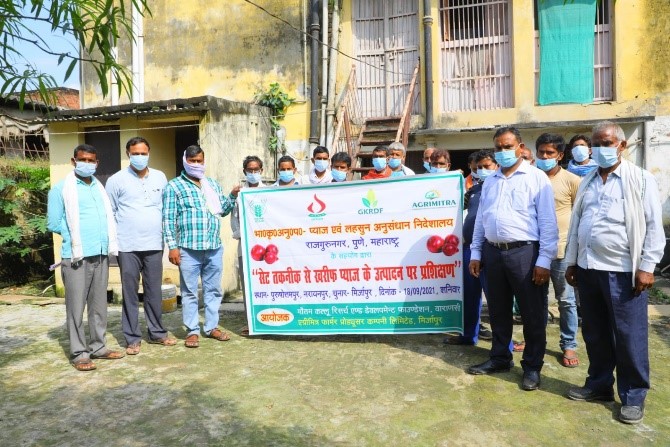 A training-cum-awareness programme for progressive farmers on raising of early kharif onion through sets technology by ICAR-DOGR was organized at Purushottampur, Chunar tehsil of Mirzapur (UP) in collaboration with Agrimitra Farmers Producer Company, Mirzapur and Gautam Kalloo Research and Development Foundation, Varanasi on 18 September, 2021. Training was based on promotion of onion cultivation, and creating awareness and enhancing the knowledge level of farmers to adopt new technologies of onion production in Mirzapur, Varanasi, Chandauli, Sonbhadra and other adjoining areas. About 25 selected farmers from different parts of Mirzapur attended the programme. Shri Lal Bahadur Singh, Director, Agrimitra Farmers Producer Company and Dr. Govind Narayan Singh grace the programme. Dr. Amar Jeet Gupta, Principal Scientist and Nodal Officer (TSP) emphasized on promotion of onion production through sets technology in eastern parts of Uttar Pradesh. Dr. Gupta delivered lecture on ‘Raising of early kharif onion through sets technology’ in the training. Commercial cultivation of onion through sets is one of the best option where growing of nursery is difficult. Due to the sudden increase of water in the Ganga river during 9-12 August, 2021 most of the onion nurseries near Ganga river were destroyed due to stagnation of water in the nursery plot. In such situation, onion sets can be planted after drain of excess water from Ganga river and can achieved desirable profit by onion crop through sets technology.

The monitoring of 15 kharif onion demonstrations at farmers’ fields including demonstrations through sets technology was done by Dr. Amar Jeet Gupta along with Dr. Govind Narayan Singh, Coordinator, Agrimitra Farmers Producer Company. Good performance of kharif onion crop was observed as farmers are hard working in nature as well as the climatic condition is congenial for onion production in these areas except sometimes stagnation of water through Ganga river flow during rainy season. A total of 55 demonstrations on newly released onion varieties (Bhima Super and Bhima Dark Red) and improved production technologies were carried out during kharif 2021. There is good scope for cultivation of kharif onion in Mirzapur, Varanasi, Chandauli, Sonbhadra and other adjoining areas of Uttar Pradesh.