ICAR-DOGR celebrated world soil day on December 5, 2021. The programme was celebrated to raise awareness of the importance of soil to the sustenance of the life on earth. The theme for world soil day 2021 is Halt Salinization, Boost Soil Productivity. Posters on World Soil Day were displayed inside and outside the campus to raise awareness among the people. Farmers-scientist interface meeting was organized on December 6, 2021 as a part of world soil day celebration. Dr. Rajiv Kale, Scientist welcomed all the participants and briefed about the programme. Dr. Thangasamy, A., Senior Scientist and Nodal Officer, Soil Health Card Scheme delivered lecture on Importance of soil testing and balanced Fertilization. Dr. A. J. Gupta, Principal Scientist briefed about varieties and technologies developed by ICAR-DOGR. Farmer-Scientist interaction was also organized during the meeting and all the scientists from ICAR-DOGR were participated in the event. Dr. Ram Dutta, Principal Scientist and I/C Director, ICAR-DOGR in his remarks stated about the importance of world soil day. Fifty-two farmers and twelve students from Pune district were participated in the event. During the meeting, farm inputs were distributed to the farmers. The meeting ended with vote of thanks. World soil day was celebrated by following the COVID guidelines issued of Govt. of India. 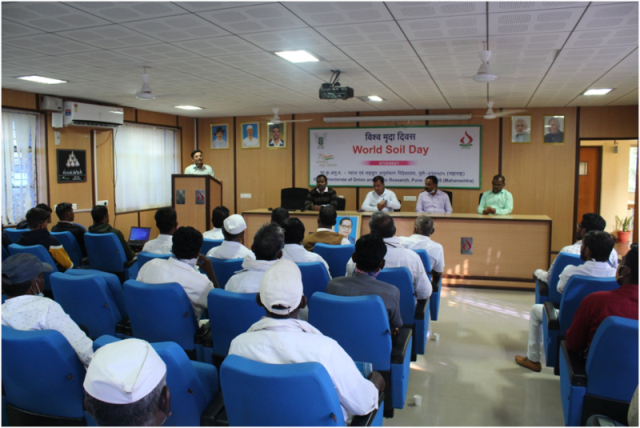