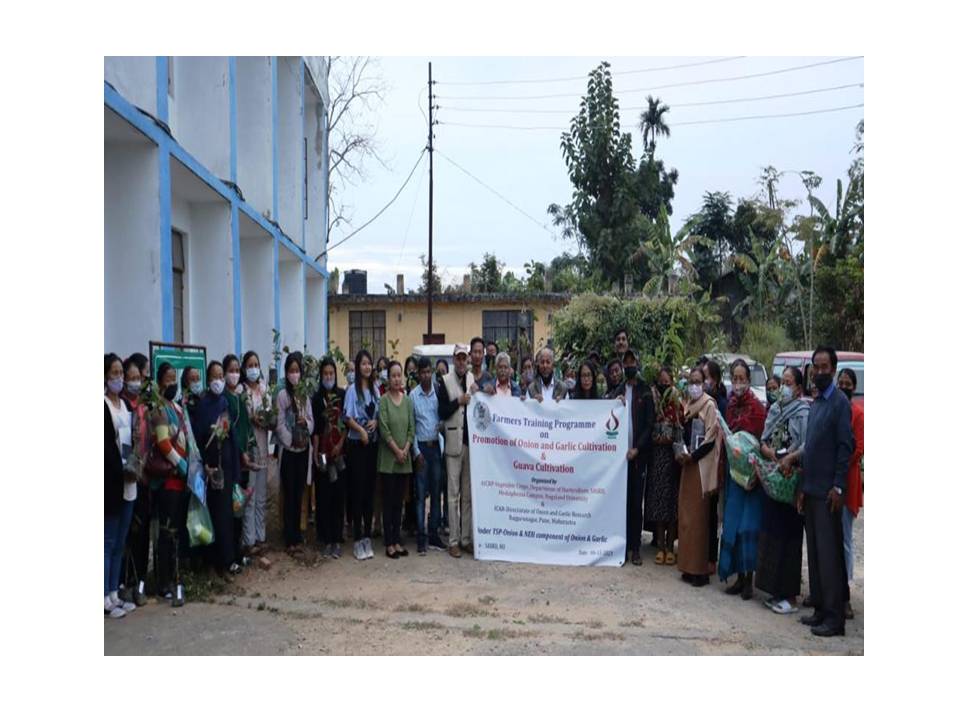 A farmers training on “Promotion of Onion & Garlic cultivation” was conducted on the 6th of December, 2021 under NEH Component for Onion & Garlic,ICAR-DOGR in collaboration with SASRD, NU, Medziphema,NagalandUniversity with the objective of promoting onion & garlic cultivation among tribal farmers.The inaugural programme was chaired by Prof. AkaliSema, Dean SASRD and the programme was graced by Dr. Major Singh, Director ICAR- Directorate of Onion and Garlic Research, Pune, Pro-Vice Chancellor (acting), SASRD, NU Prof. R.C. Nayak and Dr. Vijay Mahajan, Principal Scientist and Nodal Officer, NEH, ICAR-DOGR.Dr. Major Singhencouraged the farmers by highlighting the importance and prospects of onion cultivation in Nagaland and also stated that the whole sale price of Onion in Nagaland is the highest in India and therefore this programme was initiated to help the local farmers to be self sufficient and also to generate income. A brief remark was also given by the Pro-Vice Chancellor, SASRD, NU encouraging the farmers.

In technical session-1 on “Promotion of Onion cultivation” was delivered by Dr. Vijay Mahajan, Principle Scientist and Nodal officer NEH Component for Onion & Garlic while technical session-II on “Guava cultivation” was delivered by Dr. A. Sarkar, Assistant Professor, Department of Horticulture, SASRD, NU. The training was attended by 80 farmer participantsfrom Medziphema village,Hekheshe village andNew Socüünoma village under Dimapur district.This training programme was held with the aim to promote onion cultivation which automatically will mend the requirement of the local people as well as it would be a source of income generation as onion cultivation is not taken up by many framers as such at present. In the discussion hour, farmers shared their problems which they are facing in cultivating onion and the subject experts provided helpful suggestions.The wrap up was conducted by Dr. MoakalaChangkiri, CO-PI NEH Component (Onion & Garlic). The seed of onion and planting material of garlic were already distributed to the tribal farmers. The planting materials consisting of best performing four guava varieties, organic inputs like neemoil, biofertilizers and watering cane were also distributed to all the participants. The villagers expressed their heartfelt gratitude for initiating such a programme under NEH Component for Onion & Garlicand assured full cooperation for the success of the programme. The programme was coordinated by Dr. Aastik Jha , PI NEH Component (Onion & Garlic), Nagaland Centre, Dr. MoakalaChangkiriand Mrs. Yongkongtula, STA AICRP (VC) and vote of thanks was proposed by Prof. S.P Kanaujia, Project Incharge, AICRP (VC).