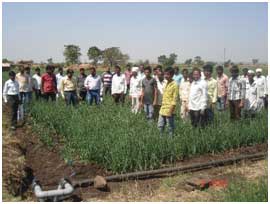 Bhima Kiran is a light red onion variety with good bulb storability developed by the ICAR-Directorate of Onion and Garlic Research (DOGR), Rajgurunagar has become a success story in Maharashtra and adjoining states. This variety had been recommended at national level in 1stAnnual Group Meeting of AINPORG held at CITH, Srinagar (J&K) during 10-11 May, 2010 for rabi season for cultivation in Andhra Pradesh, Bihar, Delhi, Haryana, Karnataka, Maharashtra, Punjab and Uttar Pradesh. It matures in 125-135 days after transplanting and has light red attractive bulbs with good storability. 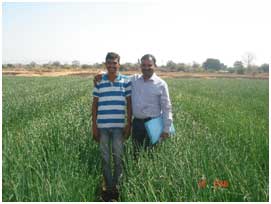 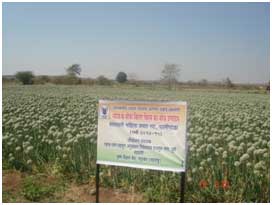 had raised onionseed crop as per DOGR recommended technology and produced 279 kg per acre onion seedand earned net income of Rs. 1.04,000/- per acre even when onion seed were sold at the rate of Rs. 450/- per kg to DOGR on buy-back basis. Several demonstration have been conducted in different part of the country on onion bulb and seed production of Bhima Kiran including more than fifteen demonstration under tribal belts of Nandurbar and farmers were benefited because Bhima Kiran was found best for bulb storage up to five month during rabi. Hence, farmers have shown interest in this variety and DOGR have already sold 23.22 q seed of Bhima Kiran. 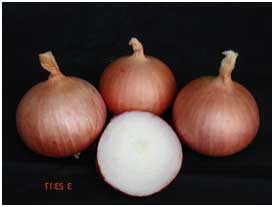 This varietyis now grown over1000 acres in different states. Most of the farmers are often earning a net profit of more than Rs. 1.0 lakh per acre by cultivating Bhima Kiran. Mr.Harish Nurjee Vadvi and Mrs. Archana Surupsingh Valvi also felicitated on the occasion of 19thFoundation Day of ICAR-Directorate of Onion and Garlic Research, Rajgurunagar, Pune celebrated on 16thJune 2016for their contribution to onion cultivationgives due credit to DOGR for his achievements. 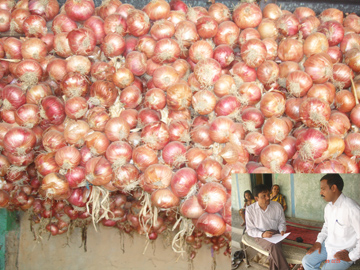 Shri Ravindra Namdeo Gorde, farmer of Gosasi village, District Pune was one of them. He has narrated that he got tremendous increase in onion bulb yield after applying ICAR-DOGR technologies. According to him previously he was cultivating onion crop by using traditional practices. He was spraying pesticides and insecticides after seeing incidences of diseases and insects. Now he takes precautions before diseases and insects occurs. He does treats onion seed with thirum before sowing in nursery. He transplants onion seedlings after dipping roots in carbendazim and carbosulfan solution for two hours. Afterwards, he sprays insecticides and pesticides time to time as per DOGR advice. Last year on 22 July 2015, Shri Gorde had sown seed of Bhima Shakti in nursery. He transplanted seedlings on 5 September 2015. He harvested onion crop on 25 December 2015 and sold onion in market on 5 January 2016. Shri Gorde was previously getting only 60 bags (1 bag = 65 kg) /acre of onion bulbs. But last year after using advance technology of onion cultivation, he got 150 bags of good quality onion bulbs in one acre. As his onion bulbs were of good quality, he received market rate of Rs. 21 per kg. Previously, he was getting only Rs. 10 per kg.

In this way, Shri Gorde has been benefitted due to advice of scientists of ICAR-DOGR under ‘Mera Gaon Mera Gaurav’ scheme.

White Onion is preferred over red onion in the Vidarbha region of Maharashtra. Directorate of Onion and Garlic Research (DOGR) developed a high yielding white onion variety ‘Bhima Shubhra’. This variety was recommended in the workshop of All India Network 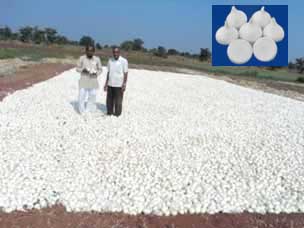 Shri Namdeorao Adhau, from Patur, Akola (Maharashtra), purchased 5 kg seed of ‘Bhima Shubhra’ from DOGR and sowed onion crop on 1.25 acre area on raised bed as per recommended technology of DOGR. He obtained a record marketable yield of 21 tonnes/acre of good quality bulbs with uniform size and without doubles and bolters.

He earned a net profit of Rs. 2.5 lakhs by marketing the produce of ‘Bhima Shubhra’.  Impressed by the performance of this variety, he decided to disseminate the technology to the farmers in his vicinity. Shri Adhau formed a group of about 300 farmers from twelve villages of the region. Now this group is promoting the cultivation of ‘Bhima Shubhra’ in an area of more than 750 acres in these villages. Most of the members of this group are often earning a net profit of more than Rs. 1.0 lakh/acre.

Shri Adhau displayed the bulbs of ‘Bhima Shubhra’ in various agriculture exhibitions including at ‘KRISHI VASANT’ - a National Agriculture Exhibition held at Central Institute for Cotton Research (CICR), Nagpur during 9-13th February, 2014. Shri Pranab Mukherjee, Hon’ble President of India was very much impressed by the quality of bulbs of onion variety ‘Bhima Shubhra’ being displayed by Shri Adhau. Shri Mukherjee remarked ‘Bhima Shubhra’ as the King of Onion.

Bhima Purple a high yielding garlic variety developed by the ICAR-Directorate of Onion and Garlic Research (DOGR), Rajgurunagar has 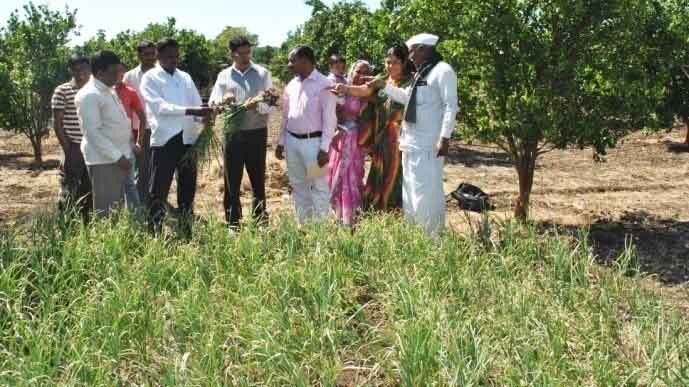 become a success story in Maharashtra and adjoining states. This variety had been recommended at national level in 2nd Annual Group Meeting of AINPORG held at Ooty (TNAU, Coimbatore) during 29-30 April, 2011 for cultivation in Andhra Pradesh, Bihar, Delhi, Haryana, Karnataka, Maharashtra, Punjab and Uttar Pradesh. It matures in 135-140 days after planting and has light purple bulbs with good storability. It is also field tolerant to thrips and foliar diseases. Mr. Vishnu Ramchandra Jare, a farmer from Bahirwadi, Ahmednagar (Maharashtra) had purchased 1 kg mother bulbs of Bhima Purple from DOGR in 2007 and raised garlic crop as per DOGR recommended technology. He conducted trial with different garlic varieties and found 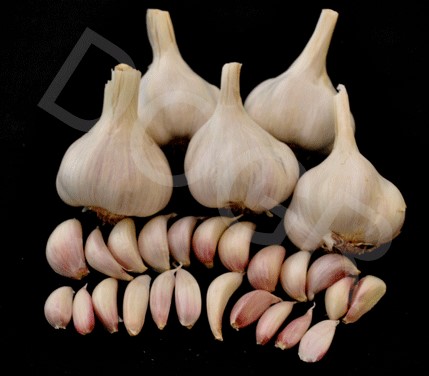 Bhima Purple to be the best yielder. After multiplication he has raised commercial crop in last six years and obtained a record net yield of 40 q/acre of uniform bulb shape and colour. He earned a net profit of Rs 2.0 lakh/acre by selling garlic bulbs @ Rs. 80-100/kg as seed to other farmers. He is continuously multiplying Bhima Purple along with another farmer Mrs. Lata Arjun Konthivire from Jeur, Ahmednagar. In 2014-15, both the farmers planted Bhima Purple in about 40 acres and harvested bulbs were sold as seed directly to different farmers from Maharashtra, Karnataka, Gujarat and Madhya Pradesh. This variety is now grown over 600 acres in different states. Most of the farmers are often earning a net profit of more than Rs. 1.0 lakh/acre by cultivating Bhima Purple. Mr. Jare who is the recipient of Late Vasantrao Naik Krushi Bhushan Award (2012) and Mahindra Samriddhi India Agri Award (2013) for his realistic achievements in cultivation of garlic gives due credit to DOGR for his achievements.

Kharif onion production is not a tradition in Vidarbha region of Maharashtra. The farmers of Vidarbha generally cultivate Rabi onion. But 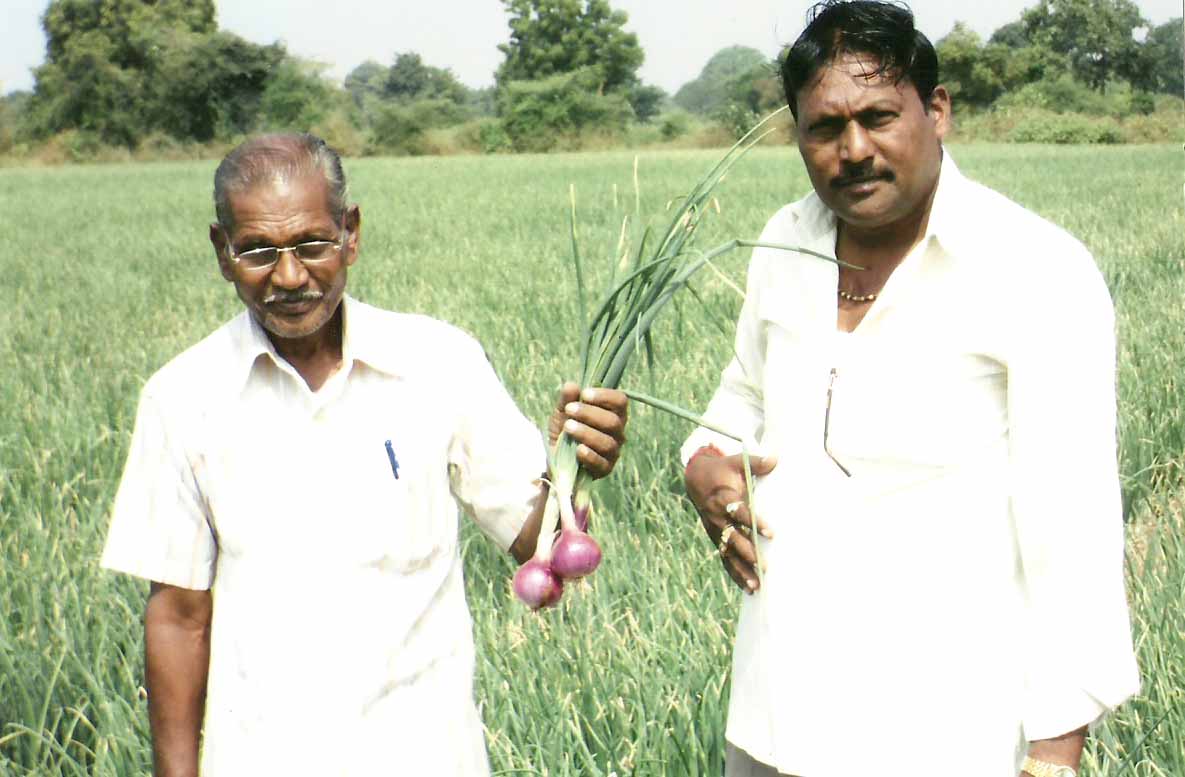 due to the factors like shortage of water, irregular electric supply, high temperature rabi onion production is also becoming less profitable. Keeping these constraints in view, Shri. Namdeorao Adhau, a progressive farmer of Patur, Akola of Vidarbha region (Maharashtra), decided to cultivate Kharif onion in his field. He was advised on Kharif onion production technology developed by DOGR for growing onion crop on Broad Bed Furrows (BBF) with micro irrigation and provided with technical bulletins and CDs published by DOGR. First he planned for 4 acre and used variety Bhima Super developed by DOGR and raised his nursery on raised beds with sprinkler irrigation and transplanted seedlings on BBF with sprinkler irrigation in the first week of August. He has followed fertilizer doses and plant protection recommendations as per DOGR guidelines. He harvested onion after 95 days and got 10 ton marketable onion per acre and sold right at the field @ Rs.30 per kg which gave him total income of Rs. 3 lakh per acre. His cost of cultivation for onion was Rs.40,000 per acre.
Paradoxically in the Kharif season in Maharashtra, there were yield losses to the tune of 30-60%. Yield level was 2-4 t/acre planted in flat beds while raised bed planted recorded yield of 10t/acre. DOGR has popularized “Kharif Onion Production Technology”. Kharif onion plays an important role in supply chain management from October to January all over the country.

TSP on Onion and Garlic

crops was limited to the kitchen garden only before the initiation of Tribal Sub-Plan (TSP) in this area by ICAR-DOGR. The scheme was initiated in this area in April, 2013. About 350 tribal farmers were selected from 35 farmers groups. Each group undertook demonstrations on onion and garlic cultivation in one acre of land in Navapur,

Akalkua and Dhadgoan Talukas of Nandurbar. In total, 49 demonstrations on newly improved varieties of onion and garlic and improved production technology were undertaken. Kharif onion production was also demonstrated in Navapur Taluka of Nandurbar.  Fifteen tribal villages have been benefited by commercial cultivation of onion and garlic. More than one thousand tribal farmers have been trained by organizing 9 field days and 4 trainings by ICAR-DOGR.

Nandurbar areas also has favorable climatic conditions for onion seed production. Vast availability of honey bees which are main pollinator of onion further enhance the potential of seed production in this area. Production of onion seed was also demonstrated under TSP in this area. Farmers have earned 1,00,000-1,20,000 per acre net income by production of about 250 kg seeds per acre of Bhima Kiran. ICAR-DOGR intends to carry this scheme further to new areas.